Twenty-three years ago today, I was beaten into the diabetes mafia by a bum pancreas and an angry, needle-wielding nurse. If the last several months have taught me anything, it’s that there’s no easy way out of that club; there might be no way out at all.

Diabetes is everywhere! Food has carbs! Blood must be drawn/shed! Pumps need to be programmed and test strip prescriptions need to be refilled! People with diabetes are everywhere — not just on the Internet!

A few weeks ago (holy shit it was actually early September), my husband and a couple of friends and I took part in a neighborhood trolley bar crawl experiment thing. It was great. The trolley we boarded near our house was crowded, and the going was slow, but it had just stopped raining, the sun was setting, and everyone was being super nice to each other. We’d travelled about four blocks on our trolley when I felt a tap on my arm.

“Is that an insulin pump?” a girl near me asked.

“I have one, too,” she smiled, digging a near-identical MiniMed pump out of her pocket. And we all know how the rest of the conversation went. She and I talked about different models of pumps, how cool it was that we were right next to each other, CGM pros and cons, diagnosis dates, infusion sets, and what we were eating that night. I didn’t get her name, but I did get a picture of our pumps together. Naturally. 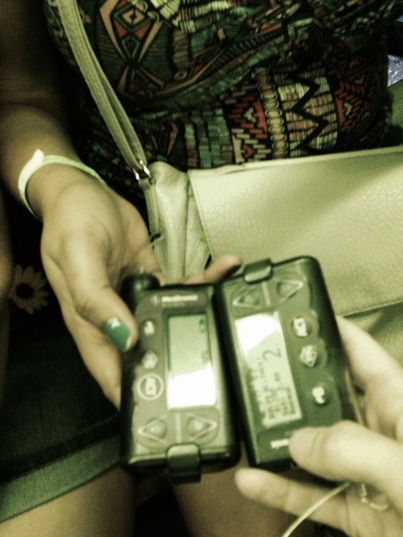 Later that evening, we were eating at a restaurant where we ran into a neighborhood friend. My husband told the story of the time we saw that friend at a bar, and how he mentioned that he knew all about my insulin pump because he knew a girl named Kerri when he lived in Rhode Island who also had an insulin pump. (That was one of the most surreal conversations I’ve ever had.)

“Damn,” our dinner companion said. “It’s like you’re in a gang. You’re in the diabetes mafia.”

I thought it was pretty funny at the time, but I can’t stop thinking about how right he was. Like it or not, I’m not getting out of this situation alive. And I don’t just mean the carb counting and blood sugar testing. I’m talking about the things that get become a part of your brain once you’re a part of the diabetes online community. I can’t meet another diabetic and not jump up and down, fueled by a mix of excitement and recognition. I can’t watch national disasters unfold and not wonder how people will get their insulin. I can’t not go out and celebrate my 23rd Diaversary, and when I do, I certainly can’t not take a picture of the delicious beer I’m drinking and I can’t not post that picture on Facebook.

I can’t not bolus for (and worry about) the carbs in that beer, and I can’t not wish I was surrounded by all the cool people this disease has brought into my life over the last two decades — especially the last few years.

I’ve been in it long enough to know that half-assing it is almost harder than going all-in. It’s just part of being a member of the diabetes mafia.

14 comments on “The Diabetes Mafia”