Aside from the overpriced chicken nuggets, this month’s Children With Diabetes Friends for Life conference was thoroughly packed with highlights: new friends, serious bonding time, metric tons of free supplies.

One highlight, however, out-highlights just about every other highlight. That highlight is Chef Sam Talbot. You’ll remember the enthusiasm with which I welcomed the news of his attendance at the conference. And as the conference progressed and the Adults with Type 1 Reception drew nearer, that enthusiasm only grew.

Friday evening found me mingling with no more than 40 adult Type 1s in a small presentation room. There were three bars, a ping-pong table, a buffet of the recipes that Sam would be making, and a food prep table that would have made Tom Collichio proud. Oh, and there were several banners advertising the as-yet-unapproved-by-the-FDA insulin pump sold by Tandem, the company sponsoring the event. (It was fun watching the Tandem reps trying to pimp a pump that essentially doesn’t even exist. “I can’t say much about it right now,” the young rep said as she welcomed us to the event, “So why don’t you guys just ask me some questions, and I’ll answer them if I can.” Great!) 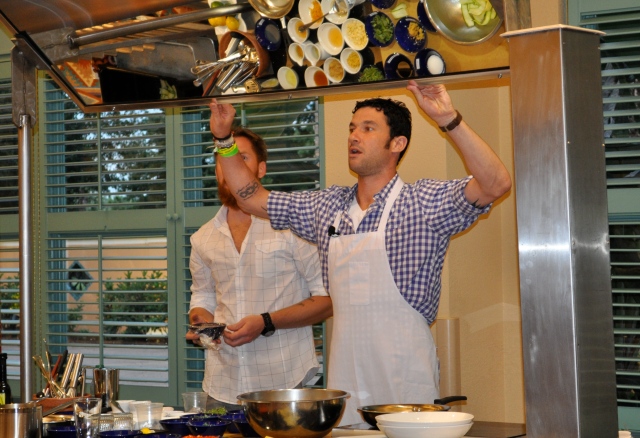 Accompanied by his bearded sidekick, Sam began his demonstration, taking questions as he worked. I was eager to know what it was like to labor under Top Chef’s insanely stressful conditions and manage semi-normal blood sugar levels at the same time. I asked him if his blood sugar ever crashed.

“Constantly,” he said. “There was a woman on the crew whose job it was to give me Snapple when I needed it. I needed it a lot.”

He made a point of asking the Type 1s in attendance to identify ourselves by raising our green-braceleted arms.

“You guys are on my team!” he cheered. “The rest of you are what I call Wannabetics.” It was the 3,000th time that week that I’d been able to claim myself among the majority, insulin-dependence-wise, but the thrill of being part of the club wasn’t getting any dimmer. I can’t tell you how much fun it was to watch that beautiful man dangle zucchini ribbons and soba noodles in front of all of us, and get to think, “He’s one of us! I’m one of his kind!”

Part of Sam Talbot’s D-celebrity charm is the fact that, compared to some of the other speakers at the conference, he really is one of us — barring the reality television career, cooking skills and supermodel girlfriend. He’s a believable example of a young adult living with Type 1. As much as I enjoyed listening to Jay Hewitt recount his adventures with Type 1 diabetes and Ironman triathlon, I don’t see myself beginning a training regimen anytime soon. I can, however, see myself preparing a blood sugar-friendly blueberry mojito and zucchini salad.

The Sam Talbot meal was a welcome break from the random grub we’d been served all week. When Sam insisted over a spread of fresh vegetables that, “If everyone ate like people with Type 1, we’d be a healthier country,” I almost choked on my gin and tonic. Clearly he’d missed the rest of the week’s festivities, where we’d all been gorging ourselves on tiny cupcakes, hot dogs, ice cream sandwiches and bacon. (At least they all came with carb counts.)

After the official demonstration, Sam headed to the hallway for a quick meet-and-greet, so I went back to our hotel. Not really — I was second in line. When I got to the front, we chatted for a minute, and I got my prized picture. Afterward, as I was off to the side devising the plan for the rest of the evening, I heard someone say my name. There, at the meet-and-greet table, Sara, Jess and Kim were showing Sam something on an iPhone. It was the blog post.

I ran over, desperate to explain. “You know who Ryan Gosling is? And there’s this site where they have pictures of him saying things?” I was sure he thought I was nuts. Thank God one of the nearby Tandem representatives knew what I was talking about, so I didn’t come off as completely restraining-order-worthy.

“Yeah,” I replied, feeling like the Raddest Diabetic Top Chef Fan Ever. “I did.”

Sam’s cookbook, “The Sweet Life: Diabetes Without Boundaries” comes out in October, and I can’t wait to start knocking out the fancy-pants recipes for friends and family. Y’all can come over and have some, too.

6 comments on ““Hey Girl, Did You Do That in Photoshop?””