Some days you feel more diabetic than others. Last Saturday was one of those days.

In the course of a single evening, I had detailed discussions about diabetes with two strangers, a coworker, and one drunken acquaintance. And it’s all because I decided to wear short sleeves.

See, I’d taken a break from the side-butt sensor placement and opted for the outside of my upper left arm. It’s not usually a big deal, because I’m usually playing victim to my paralyzing upper-arm dysmorphia and rocking 3/4-length sleeves well into August. But last Saturday, I had plans to take in a minor league baseball game with a dozen coworkers. Outside. In the afternoon. In the mid-June Florida sunshine. The swensor was in full force, and there was no way I was wearing sleeves longer than two inches. 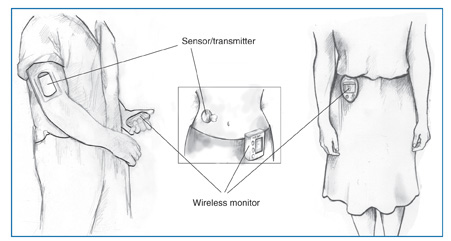 I'm just going to start carrying around a chart like this.

So there I was: out in the world with an exposed sensor! A big old clamshell taped to my pasty arm flesh, catching on my purse strap and knocking against stadium seating. The first person to vocalize his concern was a medic at the baseball stadium. I was walking back to my seat with a plastic cup full of delicious Yuengling, when Mr. Medic leaned over his portable defibrillator thingie. “Can I ask what’s on your arm?”

“Sure,” I said. “It’s a continuous glucose monitor. I have Type 1 diabetes and an insulin pump and this thing transmits my blood sugar levels to my pump so I can keep an eye on them.” The best part of this entire exchange was that I got to use my plastic cup of beer as a pointer.

“I would be a terrible diabetic,” he said. And I cringed — I hate it when people say that. “There’s this guy whose house we always have to go to? He has Type 1 and his Mom calls us when she can’t get ahold of him. We go into his house, find him passed out, squirt some pancake syrup in his mouth and then get a Hungry Man dinner from his freezer and stick it in his microwave. Then we make him eat it.”

“It’s crazy,” he said, “but if I had diabetes, I’d probably be the same way.” Before I could figure out how to respond, he had to run off with this defibrillator on wheels; someone was in worse shape than I was.

A while later I went to the bathroom, where an elderly woman at the sink asked me if I had #1 or #2. I was a bit taken aback — that’s quite a question to ask a girl who’s on her way out of a bathroom stall — but then I realized she was talking about diabetes. We chatted about my pump and she told me that she’d been diagnosed with “#2” at 18, but had later been told she had “#1.” Then she said, “You’re not big, though. You must walk a lot.” I cringed inside, but nodded and smiled politely and excused myself.

When I returned to my seat, my coworker asked, “What happened to your arm?”

“This!” I snapped, whipping around, “This! Is what I’m always bitching to our insurance company about! This is my CGM! This is what they won’t pay for!” It probably wasn’t the response he was expecting. Sorry, Mike.

After the game (which we won — go Suns!), some friends and I headed up to a local watering hole, where I had my most dramatic encounter. Random Acquaintance Dude (heretofore referred to as RAD) approached me, drink in hand. “Heeeey giiiirrrl,” said he. His gaze landed on my arm.

“What happened to you here?”

“It’s a glucose sensor,” I replied, deadpan. I was getting really tired of answering this question. “It goes with my insulin pump.”

“OHMIGAWWWWD! Your WHAT? Why do you have an insulin pump?!”

He took two steps back and clasped his hands to his mouth, Home Alone style. “Jacquie, Nooooo!” Then he swept forward, embracing me in a sweaty squeeze. “OMIGAAAWWD you POOR THING! I had no idea! Are you okay? Should you be drinking? Do you feel all right? Are you sick? Does it hurt? Are you okay? When did this happen? Why didn’t you tell me? Will you ever get better? Why? I didn’t know! Oh my goodness!”

“I’m fine,” I said. “I swear.” We went around like this two or three times, until he was finally convinced that I was not, in fact, on my deathbed.

I’d been looking forward to Children With Diabetes Friends for Life anyway, but Saturday sealed the deal. I fell asleep that night, thinking about the event, and it struck me: I get to go an entire week without having to explain what my pump is to anyone!

That, friends, will truly be a vacation.

11 comments on “I Can Explain”