The week of my discontent started last Wednesday, when I plopped myself down in front of the computer for another highly anticipated hour of Diabetes Social Media Advocacy on Twitter. I was all jazzed up to chat with my PWD DOC BFFs, ready to discuss all the diabetes crap that I can’t discuss with many others, to make jokes about D-Prom and Blünt Lancet and Diet Coke addictions.

But then the first question rolled in, and I just. Couldn’t. Do it. This wave of apathy and disinterest and boredom and frustration hit me with all the intensity of a 32 mg/dl blood sugar. I shut down Firefox and relocated to the couch, and all I kept thinking was, “I don’t want to talk about this anymore.”

Make no mistake — the Diabetes Online Community has been a Godsend for me. I’ve made new friends (even though I haven’t actually met them yet), picked up a few management tricks, and have been able to face the unrelenting monotony of diabetes with more optimism than ever. But, just like diabetes itself, the DOC is large. Omnipresent. Perpetual. And as grateful as I am to have a merry band of kindred souls on call 24/7, sometimes I need a break. It sounds corny, but there are times when I feel like I’m carrying the weight of the entire diabetes universe. A few hours on Twitter yields a constant stream of others’ out-of-control blood sugars, infusion site malfunctions, sick diabetic children, mismatched CGM readings, complication updates — and on especially terrible days — reports of those who’ve lost their lives to Type 1. It’s a lot of diabetes to soak in, you know?

I’m not going anywhere, of course. As long as I have Type 1, I’ll need a place to vent and bitch and connect and cajole. I guess I’m just wondering if it’s possible that this is the one d-related emotion that I’m alone with.

I love y’all, and I’m glad that we’re united by this weird-o disease. Sometimes, I just wish we were united by something else instead. 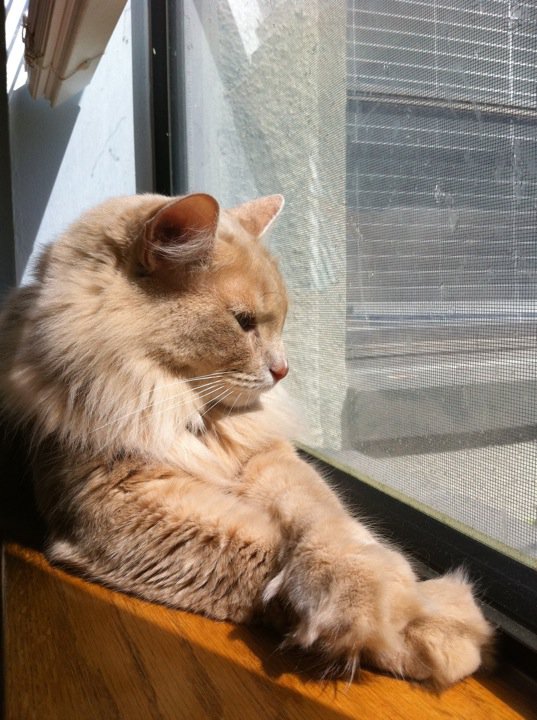 Here is a picture of my cat, posted just because he has nothing to do with diabetes.