If there are two things in this world that I am way too familiar with, they’re diabetes and advertising. For me, they’re both full-time jobs, they’re both more complicated than they should be, and they both have the potential to drive a person crazy. Especially when they come together.

I’ve had this post stewing in my head for the last several weeks, but I couldn’t quite figure out what I wanted to say. Then last night, the new One Touch Ultra Blue commercial violated the dinnertime tranquility of my living room, and I knew I could remain silent no longer.

Have you seen this commercial? It opens with an older guy sitting on a couch in his home. He looks earnestly at the camera and says, “When you have diabetes, you’re never really sure what’s happening inside your body.” 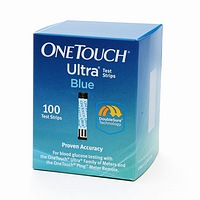 I can’t say for sure what comes after that. If I recall, it’s some nonsense about how One Touch Ultra Blue test strips are here to save the day, because they’ve got some imaginary “DoubleSure” technology that always lets you know exactly what your blood sugar is.

After seven years at an advertising agency, 32 years of life and three seasons of Mad Men, I guess I shouldn’t be surprised that advertising is all about selling a false dream. A lie, if you’re feeling particularly cynical. And it’s one thing if what companies are promising me is longer looking eyelashes, or a trash bag that will keep my kitchen from smelling like day-old cauliflower, or a phone that will make me awesome. We tend to take these messages with a proverbial grain of salt, even if they do ultimately affect our purchasing decisions.

When it comes to selling me on diabetes supplies, though, things get weird. For instance, the good folks at Johnson & Johnson must be huffing control solution if they think I’ll believe that their test strips are going to consistently tell me exactly what my blood sugar level is. The significant discrepancies in glucose meter accuracy is a topic that Kerri at Six Until Me delved into several months ago, as did Kelly at Diabetesaliciousness and Scott Strumello on his blog. As each of them so articulately pointed out, 20% to 30% is an unforgivable margin of error when you’re relying on test results to plan your meals, your insulin dosage, and ultimately your day-to-day life.

Now, instead of investing in improved accuracy in their test strips and meters, One Touch brings us their new blue test strips and an illusive advertising campaign to push their popularity. I can remember the first vial of blue test strips I cracked open. “Look at this,” I griped as I showed my husband a strip. “They have to print the brand name on it, just in case I forget what kind to buy. It’s like a teeny tiny commercial that I get to look at 6 times a day.”

My cynicism isn’t limited to One Touch Ultra Blue commercials, though. The way diabetes — and the accessories that go with it — appear in advertisements can usually get my goat. Like the fact that every ad you’ll ever see for a blood glucose meter will show 104 or 106 as a test result. If I ever saw an ad that showed a meter number of 313, I’d probably run out and buy said meter out of sheer appreciation for the manufacturer’s honesty.

Then there’s the Freestyle ad that shows a woman painting in a field — with a poor man’s 10,000 Maniacs playing in the background — while she talks about how her meter makes diabetes control so simple. Even my box of CGM sensors is adorned with a photograph of a beautiful woman on a beautiful couch, about to dig into a beautifully massive slice of cake. If this perfect diabetes world exists, I’d love to go there. Unfortunately, we all know it doesn’t.

I guess the underlying bummer here is that diabetes isn’t just a disease — it’s an industry. And that industry is why I have little faith in a forthcoming cure. It’s why Novo Nordisk pulled out of Greece for several weeks this summer. It’s why meters are free and test strips cost a dollar each. It’s why whackos publish books that promise heaven-sent cures for diabetes, as long as you pray hard enough.

I fully understand that insulin pumps don’t grow on trees, and that a certain level of commercialism is necessary to keep the innovations coming. I just wish that Abbot and LifeScan and Medtronic and the gang would understand this: invest what you need to to make your products work as well as they can, and they’ll sell themselves — no advertising necessary.